A Plate, a Parade, and a Song

First of all, there was no parade and no song.

But there was a plate. A plate of cupcakes. I can show you the plate, but the cupcakes are missing. Why? Because our grandchildren ate them all up. In fact the two older boys ate theirs up seconds after they landed on the plate. I missed the photo op completely.

Last weekend the family gathered to celebrate the Fourth of July. Some months ago, I had read Laura Brennan’s suggestion about celebrating success of family members with a plate of accomplishment. I caught her enthusiasm and thought “What a great idea!” All four grand-kids had received recognition at school this past year, so it seemed sensible to combine a national holiday with a family celebration.

Our grand-kids’ accomplishments were not measured by degrees as adults might do. There was as much hoopla about a memo from a teacher dashed off in minutes as for a bound book in a school library.

We celebrated Patrick’s printed book “My Life as a Pencil”

And Ian’s quality of charity and compassion 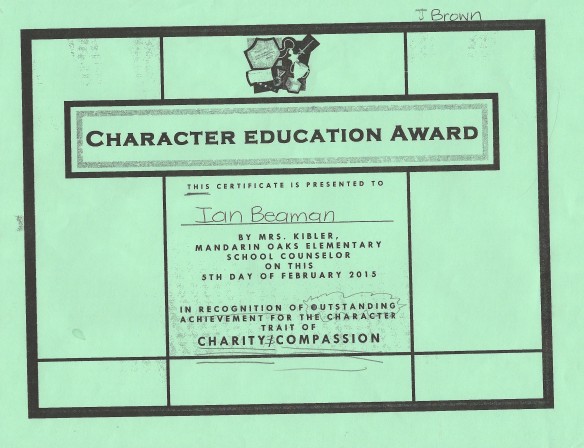 As long as the pixels and electrons hold together on this website, today’s post will be a family record for the Daltons and the Beamans for years to come. Just as importantly, I pass this celebration along as a template to commemorate all sorts of happy occasions among your own friends and family members, including nieces and nephews.

Back to the celebration: I don’t really think my grand-kids paid much attention when I read them the inscription on the back of the plate. They knew cupcakes were coming! Yet the Old Testament writer Zephaniah prophesied the power of praise . . .

In my Mennonite upbringing in the 1950s and 60s, honor given to a family member would probably be shyly appreciated but not expressed openly. Why? Because recognition of this sort smacked of pride, the worst sin of all. After my high school graduation with honors, my parents barely acknowledged all the recognition I received. During my Eastern Mennonite College graduation ceremony, not a word was spoken about my ranking in the class. Such practices were soon to change though. I was near the end of the Old Guard.

It is definitely not psychologically sound to overlook the accomplishments of the deserving and according to Zephaniah, it is certainly not biblical either.

As you read this post, did a name or two pop into mind, someone deserving of a plate of accomplishment?  It’s your turn to tell!