Earlier this month, my husband Cliff and family laid to rest his father Lee Beaman in a tiny urn above the coffin of his wife in the cemetery adjoining the church. Across the street from the simple, white-plank Methodist Church near Ridgefield, WA, are lilac bushes in full bloom this April. If you live in the Pacific Northwest, here is a website you may want to check out: //lilacgardens.com/ 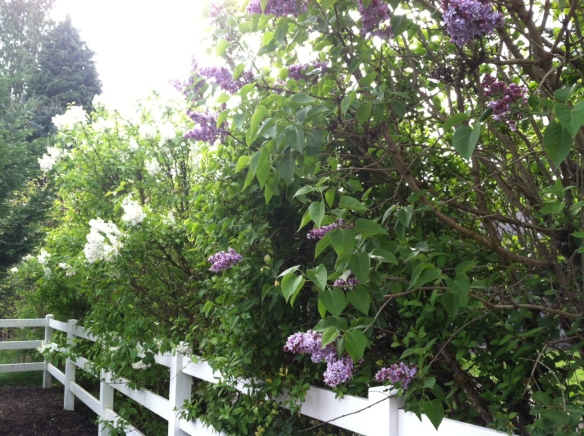 Like floral fireworks, these blooms explode in vivid lavender, each blossom bursting in “bullet-shaped buds.” Poet Richard Wilbur seems to scrutinize the lilacs he describes by looking into not just at the hundreds of teeny buds arranged in each bursting bloom tighter than stick pins in a pincushion.

As poet Wilbur points out, each tiny lavender bud appears “quick and bursting,” not holding back its beauty – is open and free. Similarly, when friends and family eulogize the beloved, their remarks tend to be candid, “quick and bursting,” revealing true feelings, knowing this is probably the last time to express their sentiments publicly.

Another poet, Walt Whitman, connected grief to the springtime and lilacs as he expresses his deep attachment to Abraham Lincoln, whose death April 15, 1865, is commemorated in his famous poem When Lilacs Last By the Dooryard Bloom’d. Written in private, the poem is a public elegy to the President the people adored. The poet revered the President too and when the cortége passed by, Whitman placed a sprig of lilacs on the coffin:

“With delicate-color’d blossoms and heart-shaped leave of rich green, /A sprig with its flower I break.” (stanza 3)  Then admitting that “the lilac with mastering odor holds me,” Whitman will forever associate the fragrance of lilacs with his fallen hero (stanza 13).

Finally, referring to Lincoln as a “Powerful western fallen star” the poem closes with the lines

For the sweetest, wisest soul of all my days and lands—and this for his dear sake,

Lilac and star and bird twined with the chant of my soul,

There in the fragrant pines and the cedars dusk and dim.

Please permit me this odd segué!

I love lavender and purple – and I love lilacs and wisteria. Wisteria climbing joyfully on a trellis on Grandma’s verandah and lilacs some distance away. . .

Close to an oak tree that Grandma Longenecker’s grand-children planted in her honor after her death in 1980, was an outhouse (now long gone) surrounded by a clutch of lilac bushes. The lilacs around Grandma’s house served as a fragrant air freshener. Of course, there is nothing elegiac about an outhouse, a tallish, square white structure with a roof, equipped with a Sears & Roebuck catalog or better yet for the job – a phone book. The outhouse, dedicated to defecation, bears evidence that bodily functions continue, that you are still alive. Lilacs thrive there.

. . .  and a bush nobody had noticed burst into glory and fragrance, and it was a purple lilac bush. Such a jumble of spring and summer was not to be believed in, except by those who dwelt in those gardens.

Now, your turn. What is your relationship to lilacs or other spring flowers? To commemorating the death of loved ones?