These were the words in my invitation to a reception promoting Project Safe Passage honoring Dr. Deb Walters’ efforts to raise funds via her Kayak trips.

A stellar professional career behind her, this woman is paddling with passion in her mission to rescue children and families who live in the garbage dump of Guatemala City in Guatemala, providing them with literacy programs and medical help.

Who is Deb Walters?

Dr. Deb has always been adventuresome, having made solo trips to the Arctic, kayaking around the Northwest Passage, and leading kayaking expeditions, which she began in 1981. Several years ago, she was among a group of Rotarians who went to Guatemala City, saw the need and decided to do something positive about it. She reports, laughingly of course, that when she embarked on her first journey one person came up to her and asked this question:

The Need & How The Safe Passage School Helps

Over 9 million people live in Guatemala City, Guatemala, and 10,000 of those people scavenge for food in the city garbage heap and for any items they can find to sell to survive. Safe Passage was organized in 1999 to rescue these people from their dire situation through literacy and medical help. Kayaking is Deb’s way of fund-raising for this organization. She has reached 92% of her goal to raise $ 150,000.00 to fund expanding the school to include grades 3 and 4.

Deb’s Day in her Kayak, a Chesapeake 18 model

She says every day “feels like I’m jumping off a cliff!” Typically she paddles 2-8 hours daily, monitored by her husband Chris back home via a tracking device that reports her whereabouts every 10 minutes. He helped her assemble tents, suits, cooking ware, and other travel equipment.

The children of Safe Passage have donated yellow, rubber ducks “El Patito Amistoso” for her kayak, so she has companionship while she travels. 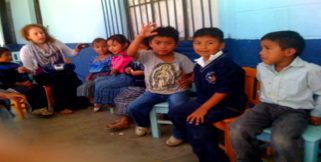 After completing 1057 miles from Maine to South Carolina, her most recent trip was temporarily stalled by intense shoulder pain alternating with numbness, and Deb had to stop four times in the early part of the trip for medical attention. Doctors discovered a herniated disk in her neck which was surgically repaired with a titanium piece which in an X-ray looks to her like the image of a “thumbs up”! She says, jokingly, “I’ve been screwed!”

She is hoping to resume this latest trip in October and complete the remaining miles to Guatemala City.

“Like many people who embrace an adventure, I learned more from the people I met than they learned from me.”

After her presentation, Deb admitted: “Even though I’ve seen this video many times, I never see it without tears in my eyes.”

Maybe your story is not as dramatic as Deb’s, but it has involved getting out of your comfort zone. We’d like to hear about it – or your response to Deb’s adventure.