A Dozen Daughters: My Mother’s Other Family

This is the family I grew up in: my parents Ray and Ruth with my two sisters and one brother. But after I left home and eventually married, my parents had more children. No, my mother was not a modern-day Sarah. She didn’t have babies in old age. But in their early sixties, Mother and Daddy “adopted” another set of children, about a dozen daughters in all, through an agency called New Life for Girls.

Because they entered my parents’ lives after I left home, I never felt envious of them. They were simply unknown to me, mysterious. Oh, I did meet two of them, Gloria and Julie. They came to see my mother when she visited her first two grandsons born in Chicago in 2003. By then these girls both had grown children of their own.

Gloria grew up in inner city Chicago with an alcoholic father who beat her mother and more than once tried to choke her with a dog chain. Her mother, single now with 8 children to feed, had to go to work. Alone in the world, Gloria turned to drugs and men, looking for love. She set her sights on rich men, men she hoped would take care of her. But the rich men were users, drug dealers or worse. Not surprisingly, Gloria became pregnant at age 14.

One day an evangelist named Brother Raymond, came into Gloria’s neighborhood. She responded to this kind man’s message of salvation and made a profession of faith in Jesus Christ. Though her heart had changed, Gloria’s life didn’t get any easier. Several times she slid back into her old ways and had more babies out of wed-lock. The hard times made her harder. She became tough as nails, always looking for a fight.

Finally, Brother Raymond suggested a way out. “There is an agency called New Life for Girls in Pennsylvania that might help you get your life on track. To enter their program though you would have to agree to their rules and stick by them. Also, your children would be staying in a separate facility.”

Gloria: “Oh no, I can’t be separated from my children!”

Brother Raymond: “Well, then we’ll try to find a host family for you, so that on weekends you can visit with them in a nice Christian home in the country.”

And that’s how my parents’ lives intersected with Gloria’s.

Gloria was looking for an anchor and she found one in her weekend visits to the Longenecker family on Anchor Road near Elizabethtown. Pennsylvania. Most importantly, she could be with her children. Mother and Daddy would pick Gloria up at the train station with her four children who played with toys including the same marble-roller I played with as a child.

Gloria’s grand-children playing with the same marble-roller we had as children:
Demetri 12, Inani 13, and Samantha 10.

And she could enjoy Lancaster County abundance. “This is how life should be,” Gloria exclaims as she recalls some of her favorite things:

My brother Mark still lived at home when Gloria and her children visited, so she got some first-hand tips on getting children to obey. When Mark questioned Mother about why he had to get up and go to church Sunday morning, Mom would reply, “Because you’re in my house and that is the rule.”

But Gloria recalls Mother’s softer side when she tearfully called her at one point to break the news about yet another unplanned pregnancy: “She never criticized me; she stood by me, and said “’You just have to trust that God is still in control.’” 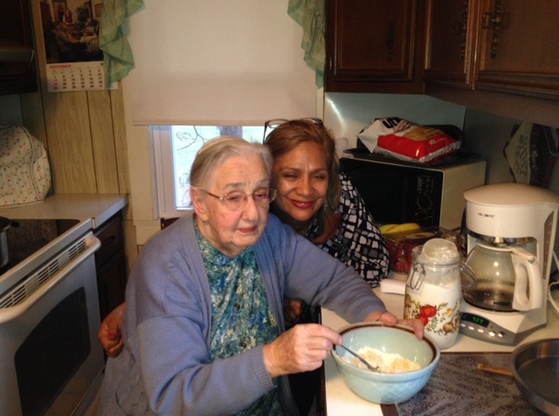 Over the years, Gloria has told her own children and grand-children this same bold statement when they question her authority: “Because you’re in my house and that is the rule.” And she teaches her clients how to use firm discipline with their children in her role as a social worker at The First Baptist Church of Wheaton, Illinois, where she has recently been appointed deaconess.

“Now I work with many Cuban refugees, help them get into an apartment, find jobs and medical aid—set them on the right track. It feels so good to see lives changed,” she says.

In a little green autograph book sitting on one of Mother’s living room end tables are listed all the names of the girls from New Life my parents have hosted. This April in her recent visit, Gloria noticed that her name was the first one to be signed in 1978, along with her sister Julie’s. After the signatures of 11-12 other girls, she signed the book again. “It’s only suitable that I sign the last page,” she says.

Therefore if any man is in Christ, he is a new creature:

the old things are passed away; behold, all things become new.

Motto of New Life for Girls