Now you are probably thinking . . . age 72 is a long way off, or it’s just around the corner. Either way, it’s a question worth pondering.

In 1700 the average life expectancy was 37. In fact, 40 would be pushing it. Yet, in that very year Mary Granville Pendarves Delany was born and lived to be 88. More impressive is the fact that at age 72 she invented mixed media collage and eventually created “an astonishing 985 botanically correct, breathtaking cut-paper flowers, now housed in the British Museum and referred to as the Botanica Delanica.” 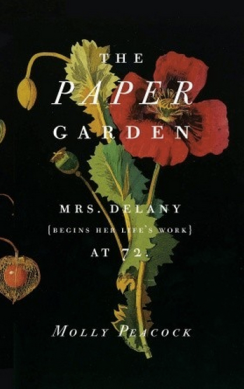 Poet Molly Peacock, author of The Paper Garden: Mrs. Delany begins her life work at 72, recreates the “Aha!” moment for Mary Delany early in the book:

One afternoon in 1772 [the recently widowed Mary Delany] noticed how a piece of colored paper matched the dropped petal of a geranium. After making that vital . . . connection between paper and petal, she lifted the eighteenth-century equivalent of an X-Acto blade . . . and began to maneuver, carefully cutting the exact geranium petal shape from the scarlet paper.

Then she snipped another and another, beginning the most remarkable work of her entire life.

Her most famous and popular image is the Damask Rose, appearing on postcards, place-mats, tea towels, and canisters. The main flower includes about 71 pieces of carefully cut papers, covering the gamut of pinks from slivers of red to blush and “under-the-finger-nail pink.”

Nodding thistle, a cousin of the dandelion, with swirling foliage

The theatrical-looking opium poppy is cut from a single green piece of paper. “The whole effect is of a kimono-like gown billowed by a breeze, like the robe of a star soloist falling down from her shoulders” upside down (118).

Mary Delany’s output was phenomenal. In 1777, the year she constructed the passion flower, she cut out her collage/mosaics at the rate of one per day, and between the ages of 77-87 creating one every four days (185).

For the passion flower, Mary Delany cut out 230 petals scissored “like little grass skirts, where the strands of grass are attached to a belt” (169). She made up her colored papers . . .  washing whole sheets of paper in varying hues. In the case of the passion flower, olive, loden, beige ivory for the leaves, and the flower rust, red, purples, deep and pale pinks, lavender. To the pigments she added gum arabic, honey, ox gall to prepare and preserve the papers. All done on a matte black background, always on dramatic black.

Mrs. Delany was born into the aristocracy with a wide circle of friends which included composer George Frederic Handel and the satirist Jonathan Swift. John Wesley even courted her. Yet her posh outer life was checkered with challenge: an arranged teen-age marriage to an aging drunken sot, problems with cash flow, at mid-life the loss of her soul-mate, Patrick Delany, a man who knew her worth, then deaths of close relatives, and finally her own illness.

Yet like her flowers, cut with a blade, not outlined by a brush, Mary Delany blazed a path for herself with a scissors, scalpel, tweezers, and needle. Combined with her imagination and gutsy determination, she made art that endures.

Age is the sum of all we do.

The root of the word inspiration is “breath.” What activity do you do that inspires you, gives you energy?

Or takes your breath away – maybe even give you a second wind?

The career of flowers differs from ours only in audibleness.

Our conversation together is just a click away. You know I’ll always chime in!

Note: Other paper florists have followed Mary Delany’s example. Livia Cetti is one of them. Here is her interview with a demonstration. You can find her book on paper flower making here.