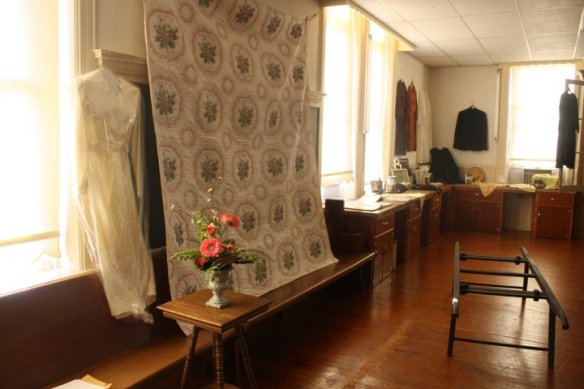 Quilt exhibited at the bicentennial celebration at Bossler Mennonite Church

You won’t find the definitions for rumspringa or bundling, (often referring to the Amish) in this mini-dictionary of Pennsylvania Dutch words, but here are some expressions the Longeneckers and other Mennonite families in Lancaster County often used growing up in the 1950s and 60s:

The word “Dutch” is actually a misnomer. Many Pennsylvania Dutch settlers originated in Switzerland before migrating to Germany, not the Netherlands. Thus, “Dutch” may be a corruption of Deutsch (German for the word German).

(Spellings below are dubious, an amalgam of what sounds I heard and some expressions “translated” in modern media from the German.)

ach: variously paired with yes/no/not sure, meaning “yes, of course” and so on.

brutzing: as in “stop your whining, crying!”

daymedich: not too smart, slow-witted

fire-ich-butz: one who “flies off the handle,” flares with anger

“It wonders me. . . .”  meaning, I wonder (Grandma Longenecker said this often.)

rutschy: restless (something you shouldn’t be in church), squirmy. Also: “giegling,” as in “quit your giegling around,” wiggling on a chair at the table, or at a desk at school.

schmutzich: smeary, messy, or runny–like ice cream from a cone melting onto your fingers

schuslich: in a hurry and leaving a mess behind

shit-mo-link: Coined by my dad, a good Mennonite brother, who would never curse or use 4-letter words. His definition: Someone who caused him trouble in business; a crook. It’s only a guess, but his invented word could have originated from the Minneapolis Moline tractors he sold in his dealership, Longenecker Farm Supply: 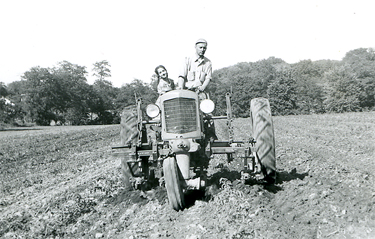 Cultivating nearly 10 acres of land for our tomato crop in Bainbridge, PA with a Minneapolis Moline tractor

“Gay” (church): non-Mennonite church where people dressed fancy without coverings and cape dresses. Some daughters from the Alvin Longenecker clan got married in the Evangelical United Brethren Church, a dressy church in Elizabethtown, PA and wore lovely bridal gowns and shimmering veils at their weddings. As a plain Mennonite girl, I dreamed of having such a wedding. (Now “gay churches” often refer to churches who welcome alternative lifestyles.)

Interestingly, many of the words and expressions we used growing up express strong feelings. Many of them seem onomatopoeic to me now, the sound giving a hint to the meaning.

This listing is just a start. What words can you add to this lexicon? From the Pennsylvania Dutch?

From a different ancestry?

Join the conversation! I’d love to hear from you, and I will always reply.

*** Here is the link to my story set in Ukraine submitted to the My Gutsy Story Contest: