The Martin clan gathers together for large family meals at my Grandma Longenecker’s house because Grandma, the oldest in her family, is a wonderful cook and has an enormous kitchen. Everybody likes Grandma, my dad’s mother. Grandma Fannie was a Martin and the Martins are Brinsers, formerly a part of a plain sect called the “River Brethren.” Source

They are not nearly as plain as my mother’s side of the family, except for Great Uncle Joe’s wife Bertha whose covering is cut squarish.  Bertha and Joe have two daughters, Honey and Mary. I press my nose to the window anticipating their arrival. They look like peacocks, favoring vivid purples, blues and greens. And always with a floaty fabric like silk, crepe, or challis. I’m determined to be a fancy girl like them someday.

Just as important, though, is what they talk about around the table and afterwards: Politics! And with a pipe. After dinner, cousin Sammy and I will play our little game with Uncle Joe and whoever he’s talking to. We know that Uncle Joe nearly burns his fingers with a lighted match as he talks about the world going up in smoke. In our little game, we try to hold our breath without passing out while he lights the match, tamps down the tobacco, ignites it, and blows out the match. Sammy and I are perched on the stairs behind the mahogany banister to watch today’s performance. Right now below us Uncle Joe is talking to my Dad about old Joe Sta-leen, the Russian Premier.

Striking the match, Uncle Joe exclaims to my dad, “Ya know, Ray, I felt a little uneasy when Truman and the Democrats were in the White House, but now that Eisenhower has taken over, things are looking better for us.” Sammy and I both take a deep breath and try to hang on for the duration.

“Eisenhower is a good, old Pennsylvania Dutchman,” my dad says. “Did you know his mother was a Mennonite from Gettysburg?”

The match between Joe’s thumb and index finger is half-burned, and he has made no effort to light his pipe yet. “Jah,” says Uncle Joe, “That’s what they tell me. We can’t trust those Russians. They’d just as soon bomb us as . . . .” On and on he goes, but he’s edged the match close enough to the pipe tobacco to blow his breath in and out a couple of times. Sammy’s face is starting to look like a red balloon and I nearly start to giggle. If we can just hang on for a few more seconds, . . . our cheeks puff out more and more with unexpelled air.

The match is charred to the absolute edge of Uncle Joe’s fingertips. Any second now he’ll singe his fingers. I hear the slow ticking of the grandfather clock in the corner, adding suspense. With one more deep inhalation, though Joe sucks in, touches the match light to the fragrant tobacco mix, blows out the fire, and a swirl of blue smoke entwines my dad and Uncle Joe in their version of politics.

With one second to go, danger is averted, and Sammy and I catch another deep breath, so we can take turns sliding down the banister again.

In spite of their fervor, my elders believed a myth: Eisenhower’s mother was actually not a Mennonite. Yes, she had Mennonite (River Brethren) ancestry, but she herself was a Jehovah’s Witness. Source

And further, their stance as Anabaptists and pacifists was politically ironic: the President they so avidly supported was a military man, a 5-star general to boot, so opposed to the attitude of non-resistance my people embraced.

A few years later, some of the rich farmland of northern Lancaster County was threatened by a proposed air base. A delegation of plain people including my dad, Grandma, and Uncle Joe, dressed up and drove to Washington D.C. to make their case with government officials. 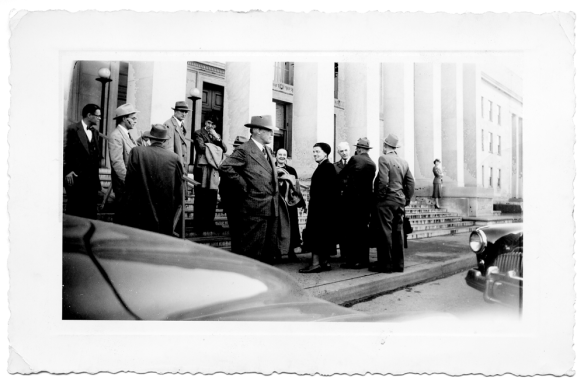 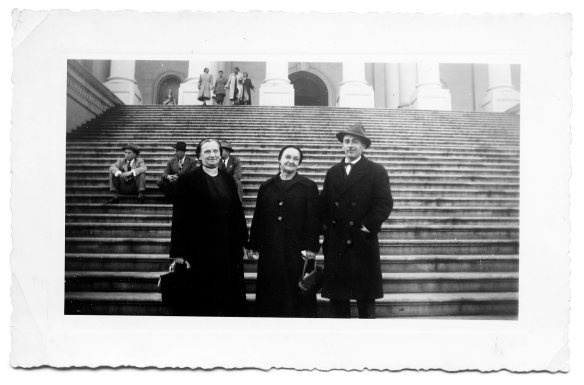 In the end, further investigation found that there were sinkholes (sinkholes!) on the farm land, making it unsatisfactory as a site for a military air base. The land spared, they thanked God Almighty.