Another Valentine, a Different Romance

Valentine’s Day conjures up images of hearts, flowers, and boxes of chocolate for most, but not for Yost. Yost is the father of Valentine Metzler, an ancester on my mother’s side of the family, born on Valentine’s Day, 1792. This past weekend, nearly 500 Metzlers from far and  wide gathered near Ephrata, Pennsylvania to celebrate this special Valentine. He, like many of his descendants, was in love with God’s green earth, a grateful steward of fertile land where his roots grew deep.

Born in the Canton of St. Gallen, Switzerland, young Valentine with his family, left the homeland. Bearing the memory of earlier religious persecution during the Thirty Years’ War in the 1600s and needing more land, the Metzlers, Anabaptist Mennonites, emigrated from Switzerland to the Palatinate of Germany with the promise of religious freedom and fertile farm land.

Bumps in the Road

Caught between the warring French and German troops in the early 1700s, Anabaptists and Mennonites from Switzerland, who settled in the Rhine River region, left Germany. They had had enough. Tired of being caught in the cross-fire between the warring French and German troops, they looked to the New World. They packed up, floated up the Rhine to Rotterdam, Holland, where wealthy Mennonites assisted them with money and provisions to set sail to America via Cowes, England. Exposed to rats, disease, thirst, and starvation, many did not survive the voyage across the Atlantic to Philadelphia.

In 1677 William Penn had visited Germany to entice people to come to Pennsylvania, assuring the Swiss transplanted to Germany that there were many similarities between Pennsylvania and Der Pfalz including the beauty of the Poconos and Alleghenies.

Later, the family of Yost Metzler, Valentine’s father, along with others, responded to the lure of freedom to worship freely and own land, become successful farmers and make Lancaster County blossom.

The 275th anniversary at Metzler Mennonite Church (June 14-15, 2013) commemorated the young Valentine’s immigration in 1738 to America.  He married Anna Nissley in 1749 and prospered on a 90-acre farm in Manheim Township, raising an exemplary family of nine. Along with other peace-loving Mennonites, Valentine had a non-combatant stance during the Revolutionary War. Thus, he was viewed with suspicion by both Patriots and the British. Yet early Pennsylvania records show that he donated horses and wagons to the colonial army.

Valentine, nicknamed Valti, was a weaver, farmer, and in the 1760s he was ordained a minister in the Mennonite Church, later becoming a bishop.

Henry Metzler, Valentine’s fourth son, was a Pennsylvania farmer with an artistic flair. The homestead is now a dairy farm operated by Amish near Strasburg, Pennsylvania. 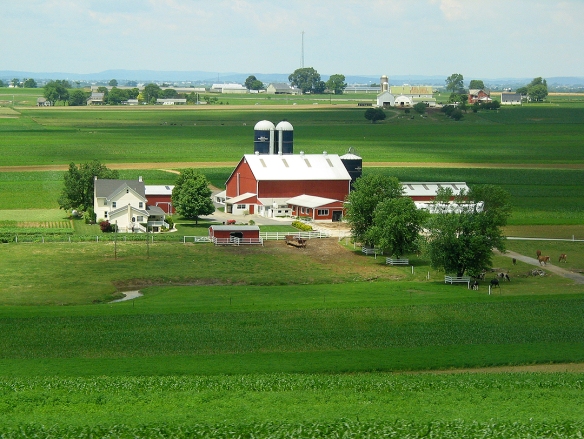 At the 275th Anniversary Celebration, plain and fancy Metzlers from Lancaster County, all over eastern United States, Wisconsin, Oregon, and even two provinces in Canada met, visited, ate, and sang together.

Voices blended in 4-part harmony, erasing the boundaries of time and distance. “Faith of Our Fathers” at Metzler Mennonite Church:

“The course of true love never did run smooth,” Shakespeare: A Midsummer Night’s Dream. But it never fails to fascinate.

“The lines are fallen unto me in pleasant places; yea, I have a goodly heritage.”   Psalm 16:6