How to Teach a Piano Lesson

“Joel, I’m going to the Christian Light Press in E-Town for some birthday cards, do you want to go along?”

“Okay, Mommy, do you think they have lollipops?” queried my mischievous son.

“I don’t think bookstores have lollipops at the counter like doctor’s offices do, but maybe they have other fun things to look at,” I said, thinking he would enjoy an excursion into town while visiting his cousins in Pennsylvania.

Entering the store, I spied precious novelties tempting to touch, a fact that struck me with a fearsome shudder because I had an 8-year-old in tow.

“Now don’t touch anything. Just look. Do you see the sign on the display? It says ‘If you break it, you buy it!’”

“Uh huh,” he said racing to the music boxes and other curios.

I turned to the bank of colorful greeting cards not far away eyeing cards appropriate for Mother and sister Jean.

“Squeak-thunk,” was the next sound I heard across the aisle, close to where I saw the top of Joel’s thatch of brown wavy hair.

Cards in hand I strode over toward Joel and saw him holding a toy baby grand piano. As I looked closer, I noticed the hinge to the piano lid was halfway broken off. Turning the piano upside down to reveal a music box attached underneath, I noted a sticker. The price tag announced: $ 13.95. Please understand, we were a struggling young family in the 1970s, my husband and I both teachers, so the money registered on my mental calculator as a staggering figure.

Right there and then I had a double D attack: disappointment at my son’s disobedience and dread coursing from head to toe knowing we had to face the owner and admit to the breakage.

My feet felt like lead as I led Joel by the hand and I trudged down the aisle toward the clerk/owner who appeared to be glowering at us behind a tall metal cash register with raised keys and a bottom drawer that slammed shut.

I approached the counter speechless but managed to turn over the music box revealing the price tag. Swallowing slowly I formed words, “I guess we’ll need to pay for this. My son broke it accidentally.”

“Yes, you will. You see what the sign says.” I knew the warning only too well.

Opening my wallet hesitantly, I shelled out the dollars and cents, Joel standing by my side his head hanging, embarrassed and chastened.

Several weeks ago I presented Ian with this same piano that has sat on my bookshelves for decades, occupying space between American poetry and art history books. Because we are downsizing, I have been passing along keepsakes to the next generation.

Joel was privy to my intention and approved my gifting the piano that plays the Lord’s Prayer as a tinkling, lullaby tune.

The presentation of the bequest began with a sturdy, red shoebox surrounded by tissue and foam padding. And then the unveiling . . . 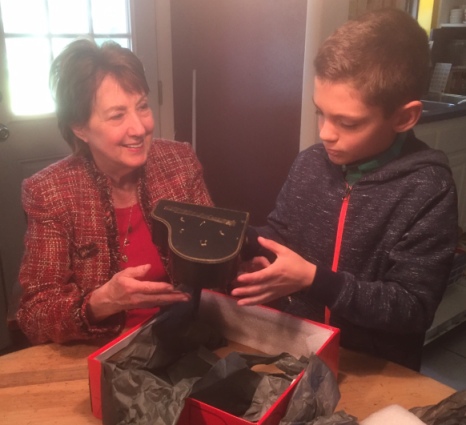 I announced, “When, he was your age, your dad broke off one of the legs on this toy piano.”

“Oh, no, not a leg, the hinge was broken off,” Joel corrected. 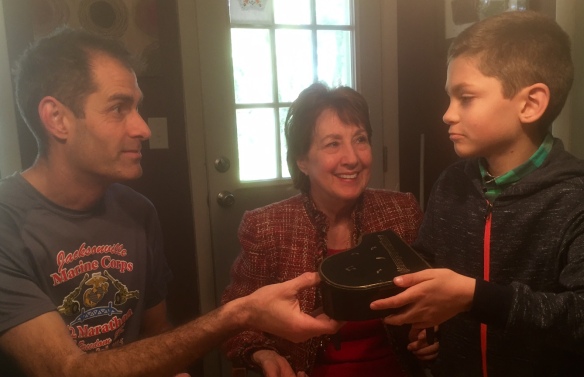 My memory had played tricks on me and the cause of the accident had morphed into something else.

Memory can be fuzzy sometimes. It’s not fixed as a photograph / locked in an album, / but it changes, it develops, mixed with time,” as Barbara Crooker wisely observes in her poem, Not a Spoon, a Key. Sometimes memory can even be wrong.

Squinting now at the underside, I see the replacement on the left, slightly larger screw and bolt than those on the other side. Lid held up with two toothpicks. 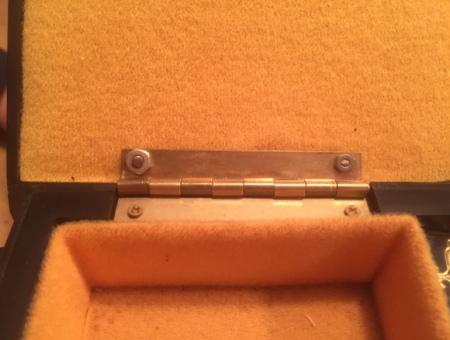 And here it is, good as new! 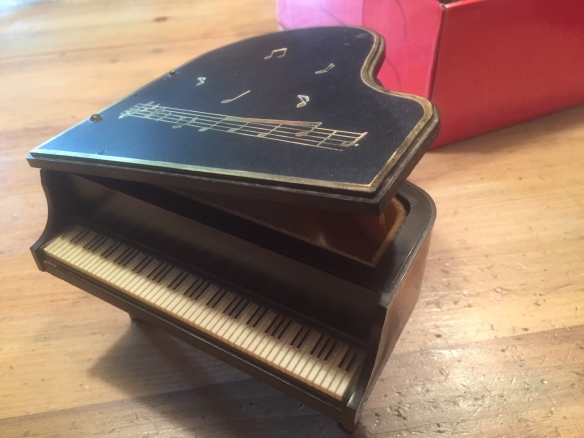 Not a word was spoken about doing the right or wrong thing.

Can you relate to my dilemma here?

Has your memory of family incidents every played tricks on you? Readers will enjoy your story and so will I.

Coming next: Raise a Mug to the Irish