Friends from Faraway and Long Ago: Kitsa and Lydia

Kitsa and Lydia were among the very few women in my graduating class at Eastern Mennonite College who did not wear a prayer veiling atop their heads. Why? Because they were not Mennonite.

Lydia Mattar from Jerusalem, Jordan and Kitsa Adamidou from Salonika, Greece were international students and my good friends when I attended EMC. Their origins both have a biblical stamp: Kitsa’s hometown was originally known as Thessalonika, the name of two New Testaments books (Thessalonians I and II) and Kitsa’s father from Jerusalem was the Keeper of the Garden Tomb, the site of Jesus’ burial and resurrection. (Photos from 1963 Shenandoah yearbook)

Kitsa, always on the look-out for fun!

I was drawn to Kitsa and Lydia during my freshman year because I have always been curious about other cultures. In fact, one year Lydia was my roommate. It appears this inclination has run deep in my DNA. Now as I hold in my hand one of my Grandma Fannie Longenecker’s letters from college I can sense her keen interest in my “foreign” friends and a deep longing to know them better.

In this letter dated December 1, 1960, she insists that she would like both girls to spend Christmas at her home. Born in 1892, Grandma Fannie Longenecker was 68 when she wrote these words to me:

Dear Marian – Guess you’ll be surprised to hear from me, I sure wanted to write before, just didn’t get at it – (Reason) older and slower . . . . Ruth was looking for a letter from you so be sure and bring Lydia & Kitsa along home over Christmas, and forget all about paint etc, two of you can stay here & we’ll have a good time that’s the thing that really matters, I think I’ll be Kitsa’s Grandma of America – Do you know what she needs or wants for Christmas? Forgot to say I’ll pay her way up & we really want them to come, so make it strong, times soon here!

Later in the letter, Grandma admonishes:

Be sure and get arrangements to come home early & if possible bring the girls along. I’ll pay Kitsa’s fare on arrival & find out what she would like for Christmas. This $ 5.00 spot is for you, maybe you need a little for odds and ends or transportation home. Tell us what you are hungry for, that you don’t get at school.

Mark tells me ‘Marian will soon come home’ and his face lights up, so we are all looking forward to that day. Hope your old toe is better.

Grandma’s interest in Kitsa persisted through most of my college years. In her letter of March 8, 1962, she referred to Kitsa and her roommate pictured on the front page of Christian Living magazine (February 1962).

For over 25 years, my Grandma and Aunt Ruthie practiced peace and goodwill toward all, as they opened their home to refugee and immigrant families, beginning with Phuong (pictured below), a young woman who arrived by boat from Vietnam. Their home was a warm cushion absorbing the cultural shock of leaving home and family; it was a safe haven, welcoming refugees from a colláge of countries including Bosnia, Croatia, Serbia, Russia—anywhere there was political upheaval. 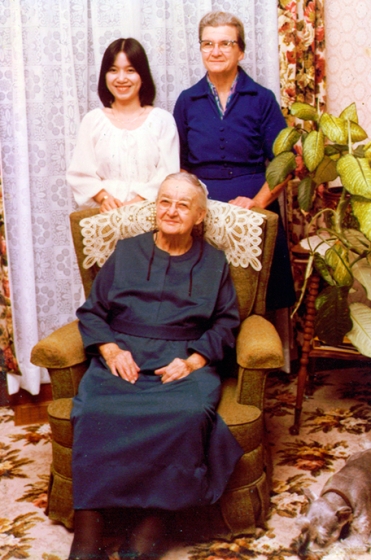 Although she graciously accepted the Salt of the Earth Award from Lutheran Social Services in the 1990s, Aunt Ruthie never bragged about her benevolence. From her perspective, she was merely sharing the love of Christ and fulfilling the statement of Menno Simons, founder of the Mennonite faith:

Framed illustration on the wall of Grandma and Aunt Ruthie’s sitting room, 1996

In a noisy world where some speak of building tall walls and wish to spread terror and violence, I am thankful for my heritage including an education at an institution, now Eastern Mennonite University, where the language of peace is preached and modeled. In fact, it is now possible to earn both under-graduate and graduate degrees in justice and peace-building at the University.

Regrettably, the contact information I have currently for both Kitsa and Lydia has not yielded any results, so I don’t know what paths their lives have taken. But I do know that their lives, like mine, have been imprinted with the power of peace, a message this world could stand a good dose of in these troubled times.

Just this morning, December 11, 2015, I had a long phone conversation with Kitsa, her smooth, alto voice music to my ears. She now lives with her husband in North Carolina and is very active at St. Nicholas Greek Orthodox Church where she is head of the Hellenic Culture initiative. She also gives private Greek language lessons.

How have international friendships affected your life? Have you connected with long-lost friends recently?