Halloween Advice from my Good Witch of the North

Dorothy had the Good Witch of the North to give her “magical protection from fatal harm” on her journey to the land of Oz and back. Yet she followed an uneven path, using her brain, sometimes thinking with her heart, and slowly but surely developing courage.

I had my own Good Witch, Aunt Ruthie Longenecker from Pennsylvania, not Kansas. As a plain Mennonite, she never gave me glittering red shoes. I had to buy them on my own after I turned from plain to fancy. But she gave me plenty of golden advice, none more emotionally charged than the time she perceived I was veering off course at college and falling for a young man she imagined would be my downfall.

The advice arrived in a 4-cent envelope written in her flowing, left-handed cursive: 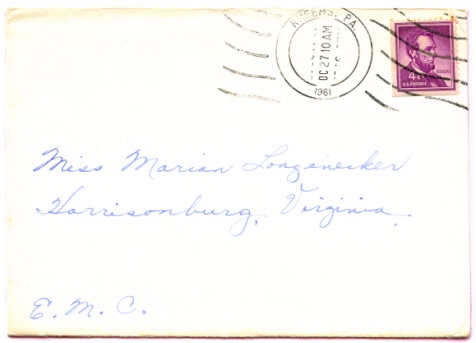 The Gibson greeting card is a cute pop-up. 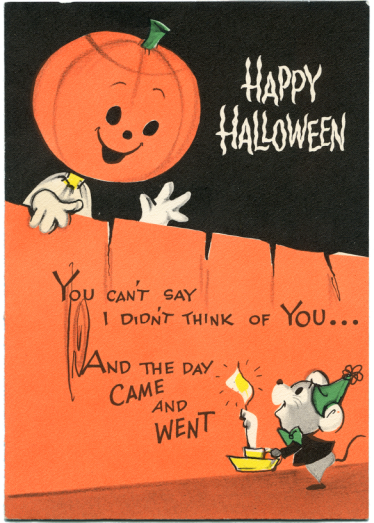 Enclosed with the card was a terse note written on the back of a deposit slip from the First National Bank of Marietta, a curious choice of stationery. (You can read this note or the text below it in print.)

Here is her message in print form, directing me to forsake that boyfriend (aka “opera singer”) at the top of the hill:

Tell that opera singer on the top of the hill he has already sung his “swan song” and that you have decided to contribute more to this world than dishpan hands and another case for the marital appeasement courts. Think for yourself and your own future and let him produce positive evidence of his greatness. Call his bluff. – Don’t be licked. If he doesn’t understand English there’s always the possibility of a second semester transfer to Millersville, E-town or Goshen – Halloween is a good time to get rid of all ghosts and apparitions, so good luck to the Little Witch in Peachey House.

Added to this note was a “Hazel” cartoon clipping to reinforce her words:

The ink jotting has become almost indecipherable over the years, but she notes:

Hazel never went to High School, but she sure is a graduate student of human nature – by the length of the unwritten line the word must be “nuts” – or maybe it’s “yellow.”

At the time (my sophomore year at Eastern Mennonite College), I was trying to keep my life on track academically despite romantic upsets and did not then realize the full force of Aunt Ruthie’s words or the depth of feeling behind then. Squinting back through the telescope of years as a much older adult, I do now.

In Aunt Ruthie’s day, women usually chose either the single life and a career or motherhood and maintaining a household. Hardly ever both.

I was beginning to see from the models emerging in the 1960s that one could answer the call of both vocations, professional and domestic. Choices did not have to be an either-or proposition, and they didn’t have to happen simultaneously either.

Did you ever benefit from unsolicited advice?

What models of vocational choice made an impression on you growing up? How did these influence you?