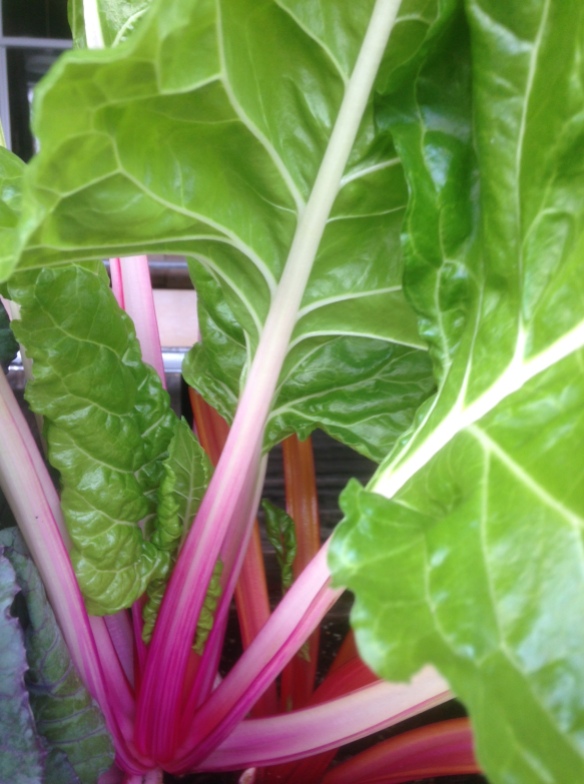 Grandma and I in the Rhubarb Patch

It’s me, pigtails flapping in the May breezes, skipping beside Grandma toward the rhubarb patch. Behind Grandma’s house toward the woods a thick nest of rhubarb stalks stands sentinel over a ridge facing the twelve sweet cornfield rows. In her garden, the pinkish-red rhubarb spears get back-row status but I think they are pretty enough for her flower garden out front.

“You said you are stopped up – didn’t have any luck when you went to the bathroom.” Grandma with her sunbonnet and apron pulls off the biggest pinkish-red stalks, the green heart-shaped, crinkly leaves falling to the ground with one swath of her knife. “A dose of this will fix that.” She’s looking intently at the rhubarb but I know she’s talking to me.

I have eaten Grandma’s rhubarb sauce before, but I never thought of it as a laxative. “It has roughage in it. It’ll really clean you out.” She runs her rough hands along the spine of the stalk to show me the fibers.

“I see,” I say but right now I wonder if it tastes as good as it looks, so I bite into a stalk and find out too late that it has plenty of pucker power. “Eeee-ow. It tastes sour,” spitting the mouthful out on the ground.

“Goodness gracious, you have to boil it first in sugar water to make it taste good, don’t ya know!” She giggles at my ignorance and finishes pulling off more rhubarb stems with a twist of her wrist like separating a stalk of celery from the bunch. Then we head back toward her kitchen.

The round, dented aluminum pot is simmering on the stove. With every passing minute the mixture of sugar water and rhubarb cut into 1/2-inch chunks is becoming more ruby red. At the last minute Grandma says, “ Just two shakes,” and I flick my wrist to shake the little can of cinnamon twice as swirls of steam half-scald my hand and wrist.

When it cools, it will taste both tart and sweet. That I know!

(Adding Strawberries to the rhubarb adds another layer of flavor.)

My Mother’s Garden, an embroidered poem in Grandma’s bedroom

Yes, rhubarb has good cathartic (laxative!) powers, but according to Marion Owen, co-author of Chicken Soup for the Gardener’s Soul, rhubarb is out to save the planet too:

Rhubarb not only saves our plants from aphids, it may also save the planet. In the mid-1980’s, when a hole was discovered in the ozone layer, researchers found that CFC’s were one of the primary reasons for the ozone’s decline.

One of the most common forms of CFC’s is freon, which is used as a refrigerator coolant. Conventional methods for breaking down CFC’s were costly and dangerous. But in 1995, two Yale scientists discovered that oxalic acid, found in rhubarb, helped neutralize CFC’s. Rhubarb to the rescue!

Beets, rhubarb, memories of springtime in the garden – all are on the table for today’s conversation!

Coming next: Mennonite Girls Can Cook