Are You a With-It?

For years, my young son Joel thought I had an eye on the back of my head. Why? I told him so.

To keep this mischief-making, dangerous pranking boy surviving beyond childhood, I kept alive the delusion of a third eye until he grew old enough to catch on to my trick. “God gave you a smart Mommy,” I declared. “I have to be ‘with it.’ Otherwise, you’d be dead!” And I meant every word.

What does “With It” Mean?

Malcolm Gladwell in “Most Likely to Succeed” from The New Yorker (Dec. 15, 2008) discusses the value of “withitness” in several fields: sports, education, and business. About teaching in particular, he notes: Educational researcher Jacob Kounin, used the term “withitness” to define that hard-to-pin-down quality of intuition and smarts which helps one sense the behaviors, intentions, and motivations of those around her/him and act accordingly.

“Test scores, graduate degrees, and certifications—as much as they appear related to teaching prowess—turn out to be about as useful in predicting success as having a quarterback throw footballs into a bunch of garbage cans.”

Perhaps no profession has taken the implications of the quarterback problem more seriously than the financial-advice field, and the experience of financial advisers is a useful guide to what could happen in teaching as well. There are no formal qualifications for entering the field except a college degree. Financial-services firms don’t look for only the best students, or require graduate degrees or specify a list of prerequisites. No one knows beforehand what makes a high-performing financial adviser different from a low-performing one, so the field throws the door wide open.

In the last six months we’ve had the opportunity to rub shoulders with a few bankers, realtors, and multiple tradespeople who did home repairs or renovation during our move.

Here in a nutshell:

Mr. Painter: His eyes surveyed the kitchen walls as he spoke, “I can do this in two hours and include your paint in the price. I’ll even leave some paint for touch-ups.”  He fulfilled his promises. We were pleased.

Ms. Realtor: “I’ll call you in two hours with an update.” She did and we felt confident.

Mrs. Banker: “I’ll be right on it.” She wasn’t though, and we spent days and weeks feeling frustrated. Later, however, we found she was covering for the ineptitude of support people in the business.

However, credentials don’t always translate into performance. We frequently had to prompt him to act in our favor. Why can’t he be “with-it”? we wondered.

* We had lunch recently at Mimi’s restaurant. Our server Kristie performed perfectly without hovering. Before we left, she boxed up an un-eaten blueberry muffin and left-over dinner rolls in separate containers. Without prompting, she labeled each box.

Item + Date + merci on the lid . . . certainly appropriate in a French restaurant á la New Orleans style. This server was definitely a “with it” woman!

* Ruth Garber Rohrer, a 93-year-old subscriber to The Mennonite magazine, read my September 2016 article in tribute to my Grandma Fannie Longenecker printed in this post.

Then I found Ruth’s editorial comment in the October issue. 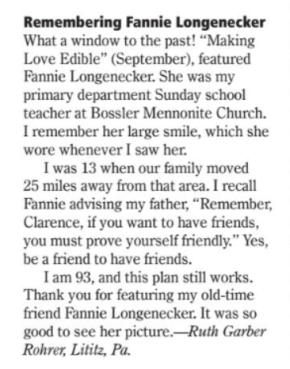 Letters to the Editor, The Mennonite Magazine, October 2016, page 5

Serendipitously,  I had discovered a link to my Grandma through one of her pupils in Sunday School at Bossler Mennonite Church, one I never knew existed. Ruth Garber Rohrer also has a presence on Facebook and socializes in the digital world.

Ruth is “with it” indeed!

How I Define “With It”

* Keen perception through the senses: Seeing, hearing, “reading” a situation beyond mere facts.

* Ability to evaluate situations and/or scan people’s expressions and connect with them personally in a significant way.

* Ability to follow-through when action is needed.

What is your definition of “With It”? What qualities would you add to the list?

Did examples from your own life pop into your mind as you read this post. Here’s where to reveal the good, the bad, and the ugly or  – the best!