Do you have photo albums un-touched in years? Is there a box of pictures stashed away that hasn’t seen the light of day in ages? What treasures may be hidden in your attic or basement?

After our Big Move August 9, more of Cliff’s artwork has come to light, pieces squirreled away, forgotten for decades.

On the July 6, 2016 blog post, I hinted that Cliff the Artist would be discovering more goodies. What I said then:

He has also found lurking in drawers, pencil drawings of college classmates and professors in the classroom, sketches of unsuspecting diners in restaurants. (To be revealed)

Cliff found a treasure trove of surprises in an armoire’s shallow shelf with other large art pieces, in niches below that, in a handmade folding portfolio, and in a cabinet with glass shelves.

Cliff and Barry Beitzel, both divinity students in college, studied Greek together. Cliff became an artist/educator and Barry, a Hebrew scholar and author of important biblical literature including The New Moody Atlas of the Bible.

In the style of Honoré Daumier who honored ordinary folks like in his oil painting Third Class Carriage, Cliff caught images of unsuspecting diners in Waffle Houses and restaurants of similar ilk: 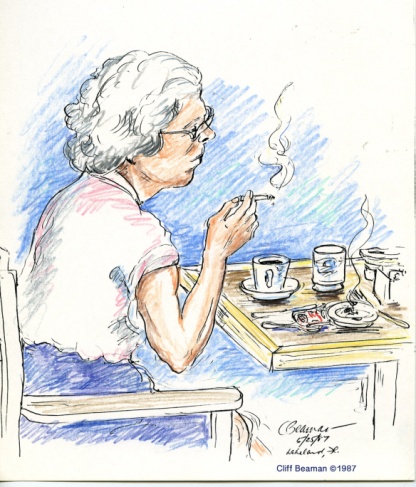 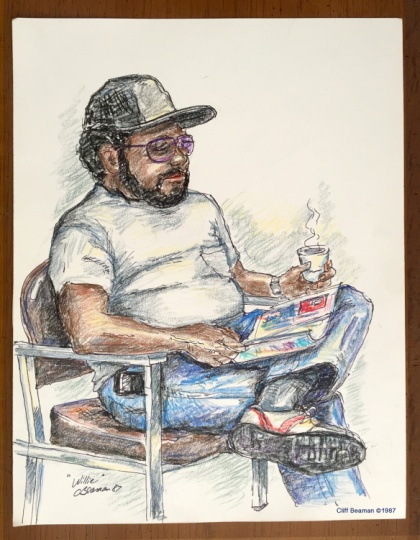 A Family Heirloom, the House on Anchor Road: Cliff presented the painting of our homestead to my dad, Ray Longenecker, 1983

Without prompting from me, Cliff wrote this memo to himself recently, feeling exhilarated about finding his long-lost “friends”

Yes, time moves on. More than thirty-seven years have passed since this calendar with Cliff’s pastiche drawing circulated for the new year.

Maybe it’s time to check through memories marinating on your shelves, incubating in boxes. No telling what treasures you’ll find.

Bonus: Two good websites to help you mine stories from photographs:

Shirley Showalter’s Magical Memoir Moments: photos and writing prompts to bring out the storyteller in you

Any I missed? Please add others in the comments column. Thank you!

Coming next: Aunt Ruthie Longenecker ~ Her Life in Pictures